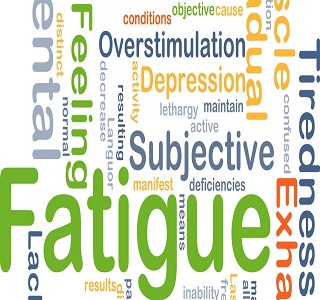 What it is Actually?

All of us struggle with being overtired or overworked from time to time. Fatigue is a common problem that is explained as a feeling of weariness, tiredness or lack of energy. It can be triggered by stress, medication, overwork, or mental and physical illness or disease. In severe cases, it may be one of the symptoms of a more serious psychological or physical disorder. Therefore, it is important to diagnose the condition at an early stage, and treat its root cause.

Fatigue can be caused by any or some of the reasons given ahead: Sleep disturbances such as not enough sleep, too much sleep, sleep apnea, shift work (changing shifts, night shifts) and alcohol can cause fatigue. Nutritional disorders such as malnutrition (kwashiorkor, protein deficiency or marasmus, total calorie deficiency) too are many times responsible for causing fatigue. Endocrine disorders such as low blood sugar or high blood sugar (diabetes), high or low thyroid and gastrointestinal disorders like gastroesophageal reflux disease (GERD) and peptic ulcer disease (PUD) can cause fatigue. Exercise disturbances such as lack of exercise, too much exercise (worn out), excessive workload and psychological reasons such as depression (loss of interest, ambition), anxiety, grief and stress are also blamed for causing fatigue. Certain blood pressure, heart and psychological medications such as beta-blockers, diuretics, ACE inhibitors, anti-depressants and anti-anxiety medications too can cause fatigue.

According to Ayurveda, fatigue is caused by the imbalance of one, some or all the three Doshas. Dosha refers to the three biological energies of Vata, Pitta and Kapha. Fatigue can have three causative factors at the grassroots level—physical, mental and emotional. It may be caused by an imbalance of Vata, Pitta or Kapha. Vata is usually the prime dosha involved. Aggravated Vata causes poor circulation of nutrient plasma to all body tissues and this poor circulation leads to feeling of fatigue. Panchakarma treatments such as pizhichil, shashtika shalipinda swedam, abhyangam is beneficial.

At a fundamental level, an instance of disharmony among the various constituents of the body overburdens the stomach in the digestion process, producing ama (toxins) instead of the healthy ojas (vital energy-giving fluid). The production of ama inside the body is the major cause of all sorts of diseases including the three types of fatigue.

1.A dosha-pacifying diet is the most important remedy for fatigue. From the Ayurvedic perspective, the healthiest diet consists of whole foods, eaten in as natural a state as possible. Ayurveda suggests Sattvic (pure) foods. These are the foods that are milder and not excessive in flavor (spicy, hot or salty). Therefore, the use of stimulants such as coffee, tea, alcohol and tobacco should be minimized. Cold and iced drinks should be avoided, especially, during or after meals so as to maintain the Jatharagni (digestive fire). However, warm water or herbal tea can be used during the meal.

2.If you are suffering from problems of fatigue, avoid excessive or physically demanding exercises. Always exercise at half of your stamina. Yoga can be beneficial. Breathing exercises (Pranayama) can also be helpful. Breathe deeply and rhythmically to strengthen the respiration system.

This site uses Akismet to reduce spam. Learn how your comment data is processed.

Cancer? Add life to your years with Ayurveda